When news broke that Microsoft was planning to discontinue MS Paint in the wake of newer and more modern offerings like Paint 3D, the Internet did not take it well. The reaction to what many assumed was Microsoft’s plans to kill the beloved 32-year-old program was one of sadness with the hashtag #RIPMSPaint trending within hours, tacked on to the end of numerous tweets from users who were not happy to learn that they would have to say goodbye to this old favorite. 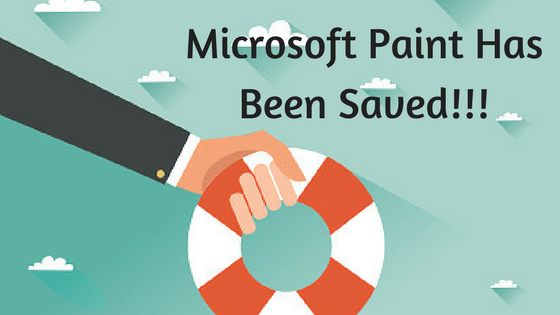 First launched all the way back in 1985 as part of the original Windows 1.0 program, MS Paint holds a deep nostalgia for computer users who have fond memories of the entertainment the program provided in the days when there wasn’t much other entertainment to be found on the home PC. For such a simple program, Paint proved to be a surprisingly versatile tool for Windows users. Whether you used it to doodle with your mouse, add your own artistic flair to a piece of clip art, or as a way to create screen grabs, MS Paint had something to offer everyone.

The barrage of tweets expressing gratitude for years of silly fun and sharing little Paint-created photos as a reaction to this disappointing bit of news did not go unnoticed by Microsoft. A day later, the PC giant released a blog post that addressed MS Paint being added to a list of “deprecated” features that would be included as part of their Windows 10 Fall Creators Update – meaning that while the program would be a part of this fall’s software package, it would no longer be subject to active development and could likely go away forever. Outlook Express and the Reader app were also on this list, but neither of those programs prompted the level of protest and outrage MS Paint’s inclusion did.

In their statement, Microsoft acknowledged the outpouring of support for this trusty old app from its large number of fans. As a result, they no longer plan to put MS Paint out to pasture. An app version will be made available in the Windows Store. In an email, a Microsoft spokesperson further clarified the company’s plans for the app, saying “MS Paint is not going away. In addition to the new 3D capabilities, many of the MS Paint features people know and love like photo editing and 2D creation are in Paint 3D–the new app for creativity, available for free with the Windows 10 Creators Update. In the future, we will offer MS Paint in the Windows Store also for free and continue to provide new updates and experiences to Paint 3D so people have the best creative tools all in one place.”

With that, MS Paint supporters can rest easy knowing that the much-loved program will be sticking around for a while longer. For those who spent many an hour playing around with Paint and making the most of its basic features, this feels like an important victory. Regardless of whether you view Paint as an integral bit of your childhood or as an easy and reliable means of creating simple graphics for a college or workplace project (or killing time in class or at the office – we’ve all been there), it’s nice to know that Paint isn’t going anywhere.

Technology is constantly evolving for the better, slowly but surely making even old standards unrecognizable. These kinds of changes are welcomed with open arms, especially by those who use them each and every day. Paint may be the one and the only program we’re all glad has barely changed since day one. Because while no one would argue that yesterday’s technology is superior to today’s, seeing that familiar little icon in the Start Menu is like seeing an old friend who is impossibly still the exact same as you remember them. In a digital world that would be completely baffling to computer users from the 80s, MS Paint is a touchstone to days gone by.

Want to find out more about the IT support solutions CTECH Consulting Group has to offer? Contact us at info@ctechgroup.net or (403) 457-1478 today. We’re the IT professionals businesses in {city} trust.